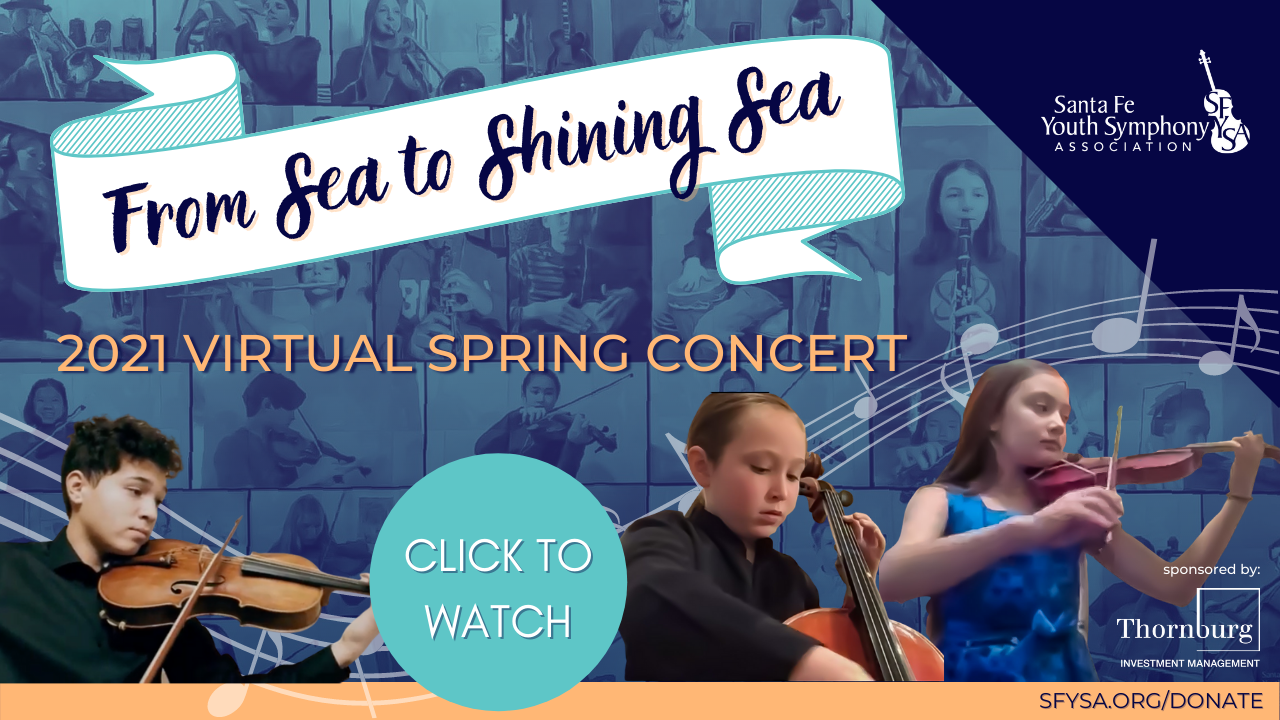 Click on image to watch concert video
Featuring virtual performances from each of our ensembles, including the premiere of the SFYSA hosted national youth symphony collaboration performing Soon Hee Newbold's "American Landscape." Also including Bach miniatures, music from Lord of the Rings, Tchaikovsky's Romeo & Juliet overture, as well as an excerpt from Samuel Coleridge-Taylor's "Ballade for orchestra," Op. 33.

There will also be a live recording of our Galistea Quartet performing together for the first time since early spring 2020. Many thanks to CCA for providing a beautiful space as a setting for this performance.

<
>
American Landscape, Soon Hee Newbold (b.1974)
The music of American Landscape was originally conceived for the dog sled racing along with the train in the opening of the film Iron Will. Newbold drew inspiration for the music from her childhood cross-country road trips, saying "for me, the music is being on a train and watching the land pass you by as you're riding across the US." In the spirit of this music, SFYSA is honored to be the host organization for this collaborative virtual performance of American Landscape featuring youth symphonies from across this country, from sea to shining sea.

Collaborating Youth Symphonies:
Albuquerque Youth Symphony - Youth Concert Orchestra, David Jennison
Boise Philharmonic Youth Orchestra - Concert Orchestra, Jennifer Drake
El Paso Symphony Youth Orchestra - James Welsh
Greater Boulder Youth Orchestras - Youth Philharmonic, Emily Bowman
Houston Youth Symphony - Youth Philharmonia, Michael Isadore
Huntsville Youth Orchestras - Joseph Lee
Loudoun Youth Symphony Youth Orchestra - Hayden Denesha
Mid-Columbia Youth Orchestras, Adrienne Fletcher
Rowan Youth Orchestra, Hayden Denesha
San Juan Youth Orchestra, Sayra Siverson
Santa Fe Youth Symphony Association - Youth Symphony & Youth Philharmonic, William Waag & Ryan Finn
Yakima Youth Symphony Orchestra & Yakima Ensemble for Strings, Bruce Walker & Christy Baisinger
The Galistea Quartet will be performing side by side with professional musicians from Santa Fe Symphony for this spring concert. Movements from Antonin Dvorak's String Quartet No. 12 in F Major, Op. 96, the "American Quartet" and from Phillip Glass' "Mishima" are being prepared. These offerings will be filmed and recorded live as we emerge from this pandemic.
Classical Bash - ​​From a method book by Jacquelyn Dillon, James Kjelland, and John O'Reilly. ​
Baroque Miniatures is an arrangement of four familiar J.S Bach melodies for string orchestra by Jerry Wesley Harris and Ed J. Cameron Law.  These instantly recognized Bach classics include four distinct styles of baroque instrumental music in the following movements:
1 - March
2 - Chorale
3 - Minuet
4 - Musette
​
​The Lord of the Rings (The Fellowship of The Ring)
This fantastic Howard Shore score from the Oscar winning Peter Jackson movie is arranged for orchestra by Bob Cerulli.
The music is challenging and epic, just like the journey of Frodo, Sam and the Fellowship.
Listen for extended techniques such as harmonics paired with soaring melodies and dramatic moments that bring JRR Tolkien’s story to life.
Romeo and Juliet Overture, Piotr Ilyich Tchaikovsky, arr. Richard Meyer.
When he completed the score to his Romeo and Juliet Overture in 1869, Tchaikovsky was only 29, almost the same age Shakespeare was when he finished writing the play. It was the young composer's fourth published orchestral piece and stands out among his works as a sudden blaze of inspiration, revealing for the first time the unique genius that the young composer would become. The overture begins with the peaceful hymn-like introduction, representing the kindly Friar Lawrence, friend and advisor to Romeo and Juliet. The peace is soon broken, however, by a fiery :Allegro" depicting the ancient feud between the Montagues and the Capulets. This leads into the famous love music of Romeo and Juliet. After the return to the previous themes, a final coda is head in which the love music is transformed into a tragic lament.
Symphony No 5 mvt 4, Felix Mendelssohn/arr. Mack (1809-1847)
One of the greatest child prodigy musicians in history, Mendelssohn's early compositions were noted for both his young age, and particularly for the quality of the writing. Mendelssohn's work ethic was legendary. He was a remarkably prolific composer, an exceptional conductor, and a general leader of the musical world. Along with his amazing compositions, Mendelssohn is often credited with both the rediscovery and launching of JS Bach's music into the public eye, as well as solidifying the conductor's presence with an orchestra to the role we've now experienced for almost 200 years since.

Excerpt from Ballade in A Minor, Samuel Coleridge-Taylor (1875-1912)
Iconic English composer Edward Elgar recommended a young rising Coleridge-Taylor for a commission of a new orchestral work for a music festival. The product was the Ballade in A Minor. This promising work originated the piano and was orchestrated by the composer. The excerpt we're playing is from the beautiful second theme of the work, and sparks wonders of what great music Coleridge-Taylor may have written had he lived a full life. The students and I have enjoyed working on this gorgeous melody in unison as well as in the context of the larger orchestral work. We hope you enjoy!